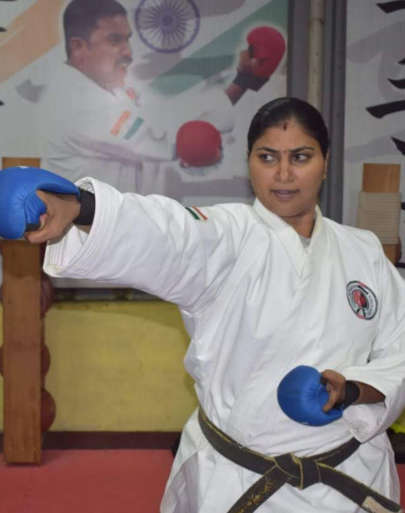 Sensei. Vanitha Karthikeyan is a very honourable and a versatile martial art Instructor who has been practising Karate for over the past thirty years. She is the Chief Instructor and the administrator of the Kicks and Punches Shito-Ryu Karate School of India.

She realises that the martial arts is not simply about kicking and punching, but more about encouraging physical fitness, self-confidence, self-discipline and ultimately achieving a set of goals. She genuinely believes that in developing an individual both physically and mentally, they will reap the rewards in every aspect of their lives and it's because of this we are dedicated to not only producing excellent martial artists but outstanding members of the community.

She has taught numerous martial arts students and taken many self defense workshops and seminars for women. Her many Karate teachings has been telecasted in Jaya TV – Iniya Illam- Tharkappu, , Sun TV –Vanakkam Thamizhagam, Jaya TV – Dial Jaya TV etc.,She has attended till now 4 International Tournaments, 25 National Tournaments, 7 state and 9 District Tournaments. Her total medal tally is 93 medals out of which 77 Gold, 10 Silver and 6 Bronze medals.