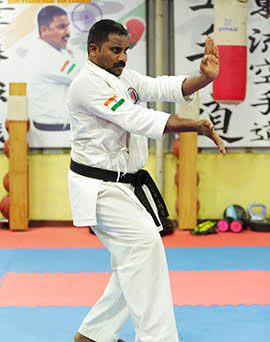 Sensei. Karthikeyan has been involved with martial arts for over two decades. He was initially introduced to this martial art while in school, where he joined a local karate school that travelled to competitions. In the back of his mind he had always had a desire to learn martial arts to the instructor level and when the opportunity came, he grasped it. The reason he chose Shito-Ryu Karate is because of his background and strong desire to learn a traditional form of self-defense. It turned out they were an excellent complement! He believes that the basic fundamentals and functional body movements, combined with clear mental focus are the building blocks of any system. This is the essence of martial arts training! The ability to visualize several alternatives to any scenario, and combining that with the trained confidence that you can get through any situation, is a foundational mindset he tries to convey to all students. “The true Karate Ka steps into the dojo with a clear mind and ready to train.” This along with his strong desire and commitment to fitness training, mentoring, ability to motivate & inspire, collaborating with the staff of Black Belts on student direction, as well as simplistic approaches to teaching, are all part of his philosophy and instruction.His many Karate teachings has been telecasted in Vijay TV – Ippadiku Rose, Kalaignar TV – Santhitha Vellai, Sathyam TV – Kakkum Kalaiye Va etc..

His interest and involvement of Karate has got him more than 600 students.